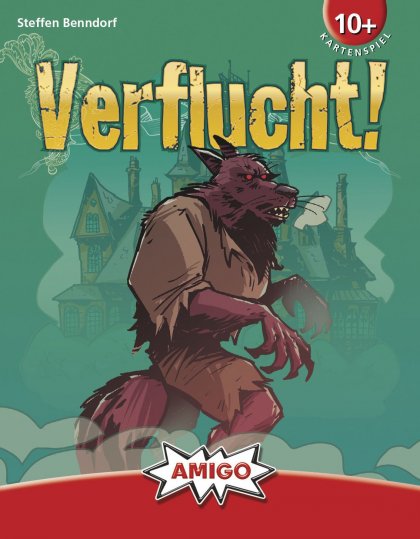 On the estate of Lord Sommerset, nasty creatures are up to mischief, with ghosts, werewolves, and headless horsemen lurking and looking for the perfect moment to attack. Monster defense is difficult because you must find protective objects and the right weapon isn't always available. You'll need to find defense somehow, though, as you don't have enough seals to last the entire night...&#10;&#10;In Verflucht! (Cursed!), players work cooperatively to battle monsters drawn from a central pile of cards, trying to achieve the best score possible.&#10;&#10;The deck consists of red cards with creatures on them and green cards with items valued from 1 to 40. These cards are mixed face down on the table, while a set of seal cards are placed in a stack. On a turn, the active player draws a card from the center of the table and looks at it. If it shows an item, they take the card on the hand without revealing its value. If the drawn card is a creature, they must place the card face up in the display. The player now has the chance to expel one of the red creatures with one (or more) green cards, and the collective value &#226;&#128;&#139;&#226;&#128;&#139;of the items played must be at least as high as the value of the creature. Players need to somehow decide among themselves who should drive away which creature or else valuable items will be spent fruitlessly!&#10;&#10;The creatures don't lie dormant on display. When the sixth creature is placed in the display, the most powerful creature present attack; the same thing happens when creatures form a group (i.e., when their values are in a numerical order). The players must expel these monsters immediately, and if they can't, they must use a seal to expel all the monsters; when this happens, the monsters are re-shuffled with the remaining face-down cards. When all face-down cards have been drawn and all attacks successfully defeated, the players win. To determine their score, place all unused seals on the remaining creatures in the display. The collective value of the remaining creatures equals the players' score. How low can you go?&#10;&#10;