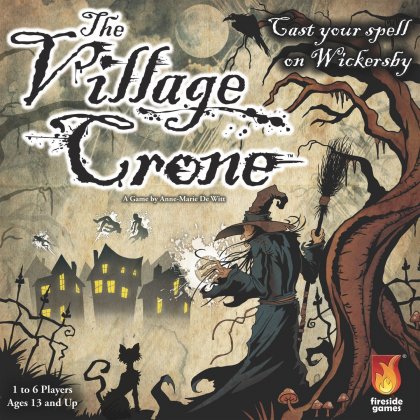 Description from the publisher:&#10;&#10;Become a witch and enter the medieval world of Wickersby in this worker placement, resource management game with spellcasting! Make villagers fall in love, turn them into frogs, or teleport them to different locations. Use your familiars to gather ingredients and cast spells on the villagers to achieve goals and score victory points as you vie to be named the village crone.&#10;&#10;All the players are witches who have come upon a medieval village without a crone. They send out familiars to gather ingredients they can use in spells to complete Witch's Scheme cards. Each of the cards is worth 1, 2, or 3 points, which also indicates how difficult the scheme is to complete. The witch who scores 13 points wins.&#10;&#10;The village consists of 6 location game boards: village green, lord's manor, farm, mill, forge, and tithe barn. The locations are modular and can be placed in any order or configuration as long as the gridlines line up. (The easiest way to play is with a 3x2 retangular configuration.)&#10;&#10;The villagers, who are the most frequent targets of the Witch's Schemes, have starting locations. The peasant begins in the village green, the lord in the lord's manor, the farmer in the farm, the miller in the mill, the blacksmith in the forge, and the priest in the tithe barn.&#10;&#10;The ingredients can be found at 4 of the 6 locations. Silver is in the lord's manor, soil in the farm, flour in the mill, and fire in the forge. There are also 3 eye of newt cards in each stack of ingredients and can be used as wild cards in spells.&#10;&#10;At the beginning of the game, each player is dealt 1 of each of the 3 levels of Witch's Scheme cards. Consulting their Books of Spells (which are the same for each witch) to determine which ingredients will be needed to cast the spells on their Witch's Scheme cards, they put 1 familiar in the village green, take turns placing 2 additional familiars in other locations, and draw 2 ingredients from those locations.&#10;&#10;The first step in the order of play is to tithe. As soon as each player knows which ingredient they will sacrifice, they place it facedown in the tithe barn. This seeds the tithe barn with ingredients that can be gleaned with the Fortune spell (which allows a player to draw any 3 ingredients from the tithe barn). However, any player who placed a familiar in the tithe barn does not have to tithe.&#10;&#10;Then, in turn order, players may move their own familiars and/or villagers and cast spells. (Spells may be cast for strategic or tactical purposes as well as to complete Witch's Schemes.) The movement is limited to a total of 6 spaces, and the number of spells is limited only by the ingredients the player has. The movement and spellcasting can be in any order on a player's turn. A player can even intersperse movement and spellcasting. If a player completes a Witch's Scheme, the card is turned over so that the other players can clearly see how many points that player has. After he/she is finished moving and casting spells, he/she draws 1 of each of the 3 levels of cards, reads them, and decides which one(s) to add to his/her hand as replacements.&#10;&#10;When all players have finished moving and casting spells, the players harvest 2 ingredients for each familiar in a location, and the broom (which indicates the first player) is moved clockwise.&#10;&#10;The spells are Conjuring (to add up to 2 more familiars into play), Love (to join the fates of 2 villagers, meaning spells cast on one affect the other and movement of one moves the other), Transformation (to turn a villager into a frog or vice versa), Binding (to lock a location down and prevent anyone or anything from entering or leaving a location), Switching (to change the place of 2 familiars and/or villagers), Summoning (to cause a villager to move to a location containing one of the player's familiars), Fortune (to allow a player to draw any 3 ingredients from the tithe barn), and Protection (to block a spell cast by another player). 1 silver can also be used to complete a Scheme out of turn or to discard and draw a new Witch's Scheme card. Each spell requires not only ingredients but also an incantation, which is provided in the Book of Spells. Alternatively, players can make up their own incantations. If a player is caught trying to complete a spell without speaking the incantation, the spell does not work.&#10;&#10;Each witch has access to the same number of starting familiars, the same ingredients, the same spells, and 3 Schemes of the same level. But the witch who most cleverly uses these resources to reach 13 points is named the village crone.&#10;&#10;The Village Crone also includes rules for solitaire play.&#10;&#10;