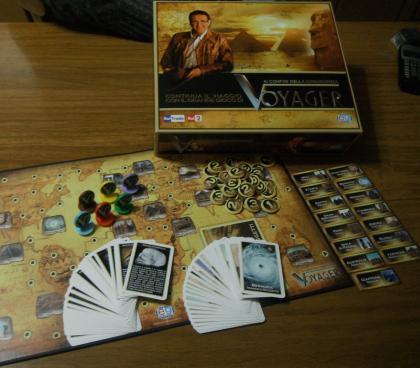 The game is simple: a sort of "treasure hunt". Based on the exploration and identification of two "mysterious" objects, the game recreates perfectly the basic concept of Voyager: exploring mysterious places to study mysterious things.
The aim of the game is unveil the "mystery". To do that you must identify an object and a point moving along a path of boxes to connect 15 locations on a world map. There are moves by launching a special die on which the face with 1 shows the logo (V) instead of the number.
If the die result is V can perform special actions.
The 15 places and 15 objects are depicted on maps.
During the game, players get Voyager chips that have a value between 1 and 3. Who gets the highest total wins.