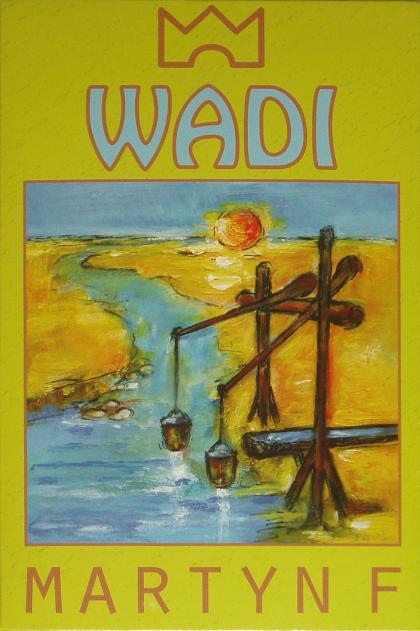 Wadi is situated in the heat and drought of the ancient Egypt desert. Water is scarce and you try to build your Shadoof (a sort of waterpump) as close to the Wadi as possible. A wadi, however, is a desert river. Water flows though it for only a small part of the year. The rest of the time it is dry. In the short wet period, you try to pump as much water as possible to the water reservoirs. Preferably in the vicinity of fertile land, because the more fertile the land, the better the harvest. And the better the harvest, the more points a player earns.

There are a few scenarios for Wadi delivered with the game. They bring a lot of variety.

Gameplay:
Players build their shadoofs on the land tiles. Each shadoof can pump water pawns from the river bed or from another land tile that lies in the vicinity of that shadoof (vicinity = water pawn lies on his own tile or on an adjacent tile). In his turn a player can carry out two actions. He can either:
· Build 1 shadoof first and then pump 1 water pawn (or vice versa)
OR
· Pump 2 water pawns.

Players earn points per shadoof. Every landtile surrounding the shadoof (including its own tile) with a water pawn on it brings 1, 2 or 3 points, depending on the fertility of the land. The player with the highest score wins.

Players "fight" to get water pawns near their shadoofs and for the places to build their shadoofs. They also try to profit from water pawns that other players pumped on to the land tiles. Because of the placing rules (not explained here) this is not always as easy as it looks.

All in all Wadi is a quick, tactical game. With 2 players it is a bit more strategic.