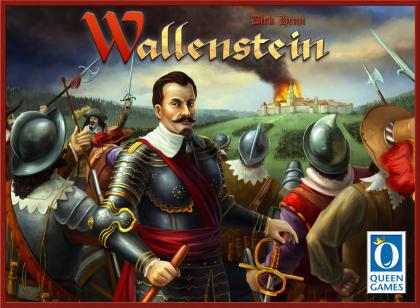 The 2012 rerelease of Wallenstein tweaks the 2002 title from designer Dirk Henn and publisher Queen Games, while including two new expansions.

The setting and game play of the two games are mostly the same. In 1625, the Thirty Years' War is underway, and military leaders like Albrecht von Wallenstein and Gottfried Heinrich Graf zu Pappenheim are roaming the country, fighting for land, and trying to establish the best of everything for themselves. The game lasts two "years," with players taking actions in the spring, summer, and fall, then possibly suffering from grain shortage and revolts in the winter before scoring points for the year. After two years, the player with the most points – with points being scored for land and buildings under one's control – wins.

In each of the "action" seasons, ten action cards are shuffled, then laid out, with five face-up and the rest face-down. The five bonus tiles (which provide extra money, grain, or armies) are also laid out. Each player then secretly assigns one of his county cards (or a blank card) to each of the ten actions on his individual player board, in addition to bidding for player order and choice of bonus tile.

After revealing that round's event card and determining player order, players carry out actions in the order determined earlier, revealing which county is taking the current action, then revealing the next face-down action, thus giving players some information about when actions will occur, but not all. Taxing a county or taking grain from it can increase the chance of a revolt during winter, but without money you can't deploy troops or build palaces or churches and without grain you increase the chance of revolt.

Combat and revolts are handled via a dice tower in which players drop army units and peasants (colored wooden cubes) into the top of the tower and see which ones emerge in the bottom tray (representing the fighting forces for that combat) and which get stuck in the tower's baffles to possibly emerge in the future.

Wallenstein includes two expansions: "Emperor's Court," in which a player's army tokens that fall from the dice tower at the start of the game become courtiers who compete for favors (special actions) from the emperor; a player can convert armies to courtiers during the game, and whoever has the most courtiers in the court's entrance hall each turn gets first shot at the favors available. "Landsknechte," which can be used with "Emperor's Court" or on its own, consists of a set of four cards for each player stacked in a particular order. If after determining turn order, a player controls counties in four different regions, he removes the top card from the stack, then takes one of the bonuses (such as money or armies in the tray) shown on the newly revealed card. This stack resets after winter ends.