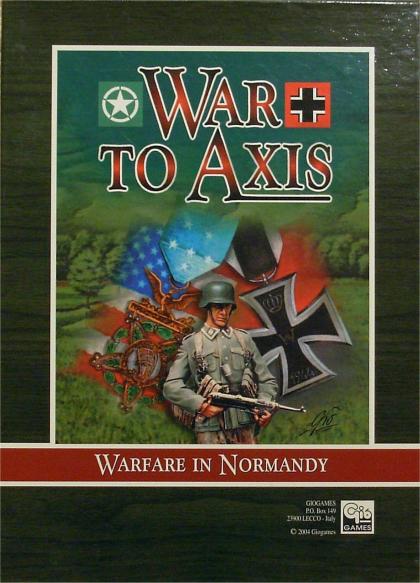 War to Axis: Warfare in Normandy

"War against the Axis powers" simply called: War to Axis (WtA) is a game in the " Histo Command Dice" series that allows you to recreate operational level battles set in the second World War.

The game includes 6 historical scenarios that are based around the Normandy Theater in 1944.

Players will plan their strategies, and activate units to reach the scenario objective in the required number of turns.

The rules allow two different levels of play, Basic and Advanced. The advanced game requires an initial planning that only a good knowledge of the basic game will allow.

The unit scale for the game is Battalion level for infantry, and Company level for other units. One hexagon on the map represents a distance of 300 to 500 meters depending on the scenario. Each game turn represents about 20 to 30 minutes.

An innovative system of activation determines the movement sequence for the various units, with the possibility for the "Command Units" to perform various additional actions such as calling in artillery support and Rally units.

All units have the possibility of performing opportunity fire when an enemy unit moves within 2 hexagons of its ZOC.

The game uses special 6-sided dice for combat with icons instead of numbers to determine outcome according to of the type of target (personnel or armored].

A deck of event cards for both the players, that also provide unit reinforcements, will make each game unique with endless replay ability.

Player aid charts for each nationality represent all the essential elements for intuitive play and immediate accessibility. War to Axis will satisfy the beginner and experienced player alike,
immersing you in a historically accurate period where you determine the final outcome.

Voti e commenti per War to Axis: Warfare in Normandy