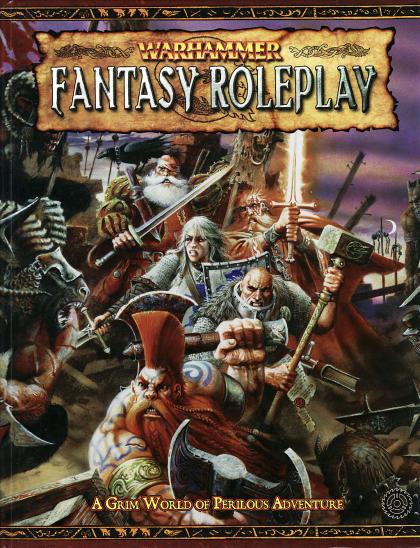 "The Old World. A dark and grim place filled with peril and riven by war. From the teeming cities of the Empire to the Elf haunted forests to the lofty crags of the World's Edge mountains where Dwarfs battle with Goblins and their vile kin, a shadow hangs over the world, cast by the dark corrupting hand of Chaos. All along its borders, the Old World's greatest nation, the Empire, seeks to hold back this dark tide. But even within the Empire there are enemies. Twisted cultists seek to bring about the Empire's fall, cold-hearted Beastmen stalk the forests, and loathsome Skaven ratmen spread plague and sickness from their subterranean lairs.

In Warhammer Fantasy Roleplay, you are unlikely heroes in a grim world of perilous adventure. You venture into the dark corners of the Empire and deal with the threats that others cannot or will not face. You'll probably die alone in some festering hellhole, but maybe, just maybe, you’ll survive foul Mutants, horrible diseases, insidious plots, and sanity-blasting rituals to reap Fate’s rewards."

"Warhammer Fantasy Roleplay is a complete game. All you need to play is this book, some dice, and a group of friends. Inside these covers you'll find:

• A quick system for character creation. You can make a character in less than half an hour and jump right into the game.
• A simple yet robust set of rules that let you handle everything from social interaction to Chaos mutations.
• A unique career-based system of character advancement and over 100 careers -- from Assassin and Bone Picker to Troll Slayer and Zealot.
• Complete rules for magic, covering both Arcane and Divine Orders and over 175 spells. Power can be had, but beware Tzeentch's Curse!
• Details on the Empire and the Old World, from the social order to religion and belief.
• A complete introductory adventure, Through the Drakwald.
• A new short story by renowned Gaunt's Ghosts author Dan Abnett.

"WELCOME TO THE ROLEPLAYING GAME OF THE WARHAMMER WORLD... DEATH AND GLORY AWAIT!"