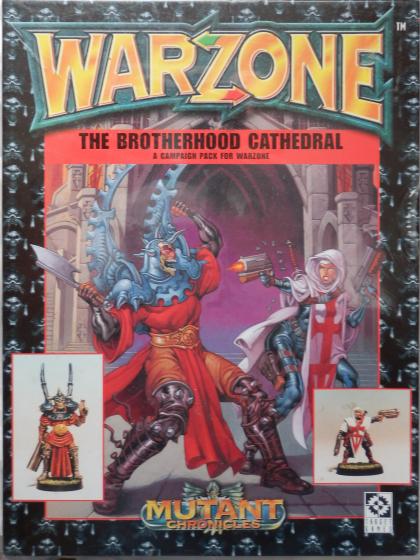 The Cathedrals of the Brotherhood stand as citadels of faith before the overwhelming tide of the Dark Legion. Raised as places of prayer they have become the focus for some of the fiercest battles. Both sides fight for possession of the sacred walls and the powerful relics that lie within the Cathedral vaults. Where one side fights to keep the Light of Faith alive, the other side fights to see it extinguished, replaced forever with Blessed Night.

A full colour card model of the Brotherhood Cathedral: on eight A4 sheets of card for you to construct.
Two exclusive new miniatures only available with this box set: The Brotherhood's - "Visionary" and the Dark Legion's - "Angel of Mercy".
A 32 page booklet, containing 10 scenarios that can be played as stand alone battles or as part of an extended campaign, where the fate of the Cathedral depends upon the success or failure of each scenario. There is separate descriptive text and maps for each scenario and battle photographs throughout to put the struggle for the Cathedral and the two new characters in context.