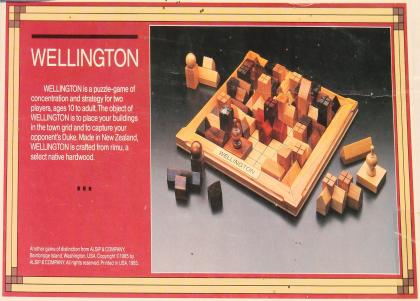 The publisher's description reads: "WELLINGTON is a puzzle-game of concentration and strategy inspired by the 18th century Pentomino concept. The Pentomino design--up to five connecting blocks in different shapes--is the basis for the game pieces in WELLINGTON, named after the capital of New Zealand in honor of Arthur Wellington, the 'Iron Duke.'"

The playing surface consists of a 10x10 grid, called the "town grid." A burgundy-colored T-shaped piece that covers four squares represents Parliament. Each player has a Duke, represented by a one-square obelisk. With Parliament and the Dukes placed on the board, players alternate turns in placing wooden blocks representing buildings in the city on the board. The objects are to capture the opposing Duke, capture territory, and capture buildings. Parliament, when captured, can be relocated to any available area on the board. Capturing the opposing Duke wins the game immediately. If neither Duke is captured, when no more buildings may be legally played the player capturing the most territory wins.

The publisher also included rules for a solitaire version.

According to the designer, fewer than 100 copies were produced.