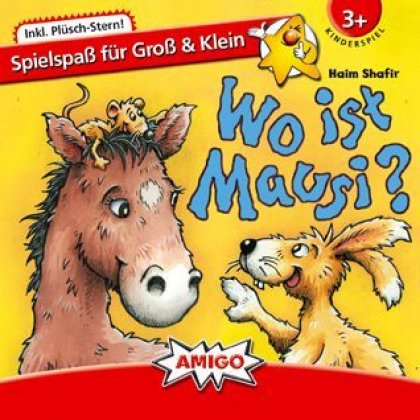 A kids card game where Mausi the Mouse visits her friends the goose, the cow, the horse, the rabbit and the pig and hides with one of them. Players have to guess where Mausi is hanging for the day, winning the card on which she's located if they do. Be the first to reveal cards with all five friends on them and you win.&#10;&#10;The short description: Each player has five cards depicting the animal friends, and these are shuffled and placed face-down before the player. On a turn, the player rolls the die, flips an animal card in front of her, and hopes it shows the animal on the die; if so, the card stays revealed; if not, the card is flipped face-down again. Roll an animal that's already revealed, and you can flip a card of your choice. Roll the moon, and one of the timing cards is flipped. The game ends when one player finds all five friends or time runs out, in which case no one wins.&#10;&#10;How to play Wo Ist Mausi?:&#10;&#10;- The six-Mausi cards with the page &quot;Mausi comes home&quot; to the top placed in the middle of the table. &#10;- Each player is dealt five cards with the same animal back color and places them with the back upwards before him. &#10;- Whoever's turn it is throws an animal that needs to turn one of his cards. If it is he animal rolles on the die, the card is exposed. &#10;- If there is a different animal, the card will once again be face down. &#10;-The dice shows the moon is one of the six cards on the side of Mausi, &quot;Mausi sleeps&quot; reversed. &#10;- The dice shows an animal that the player has already found, nothing happens. &#10;- Winner is the person who discovered the first five friends of Mausi on his maps. &#10;-When Erica is sleeping all six cards on the page &quot;Mausi&quot; lie, there is no winner.&#10;&#10;

Recensioni su Where is Pluto Indice ↑

Eventi riguardanti Where is Pluto Indice ↑

Video riguardanti Where is Pluto Indice ↑