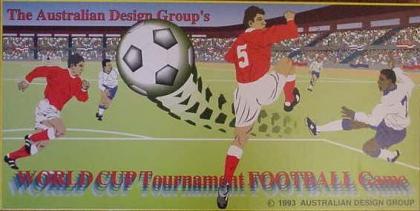 This is really a card game disguised in a rather large box. The object of the game is to get your team through the qualifying for the (soccer) World Cup, and hopefully win.

The game has a board which depicts a a bunch of soccer fields - just placeholders for the cards played in the
tournament: from 16 fields for the first elimination round and the 8 fields for the round of 16, up to the one field used for the finals. There is also a deck of cards for each of the teams involved in the game with two sets of numbers printed on the card depicting the number of goals scored and the number of penalties given to that team. Finally there are counters depicting the 32 teams in the tournament.

Each player starts the game with five random cards and the team counters are randomly distributed to each of the players (showing which team each player will 'manage'). Each team is rated either as 0, 1, or 2 - this is the 'bonus' number of goals that team will score in each match it plays.

Each player in turn can play a card onto any soccer field. On the preliminary matches (fields), the cards are placed face-up (maximum of 3 cards), on any other field, the card is placed face-down. Once all the fields are full, the matches are resolved with the winner of the match going on to the next. Once the preliminary matches are resolved and the teams determined for the next round, those cards are flipped over and the results determined. This is done all the way to the finals.

A player can determine where his team will end up playing each subsequent match and play cards face-down to try to get his team to win, but if your team is upset early - all those face-down cards that you played are now going to help some other team and not yours.