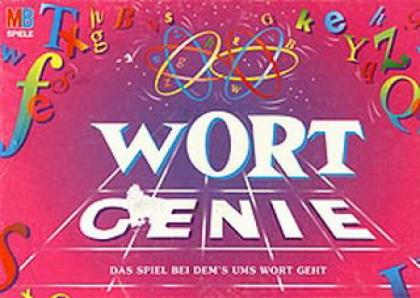 In Wort Genie, two players (or two teams) compete to find the secret words of the opponent first. There are about 100 cards, each with 6 words on it, one placed vertically, the others horizontally (crossword-like). The players each take one card secretly. On their turn, they can ask the opponent for a letter. As answer they get all occurrences of this letter in a coordinate system, just like the one of "Battleship". Then the next player can ask a letter. If they think, they know some words, they can guess them before asking for a letter. If correct, they can guess another word, until they are wrong or decide to ask for a letter. To help the players, all words on one card are related to the same theme. The first player to find all words on the opponent's card gets as many points, as the difference to the number of correct words the opponent has found out is, e.g. if the looser has found four words, the winner gets two points. Play proceeds until one player has ten points.

The English version of the game is called Battle Words. It was published by William Maclean's Games.