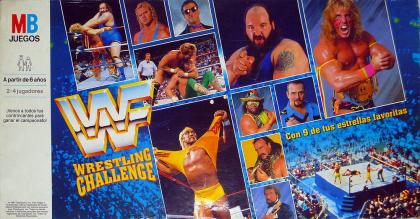 Defeat all the challengers to become champion! Purpose of the game is challenge and defeat another wrestler in a series of rounds. To do this you must put your wrestler and your challenger's in the ring, then start fighting using some "strength cards" and dice rolling. There are even "special move cards" (i.e. head grappling) that let you throw two die instead of one.
A very simple game suitable for kids or for nostalgic guys in their thirties who miss the fantastic old WWF era (you can chose to use Hulk Hogan, Ultimate Warrior, Jake the Snake Roberts, Macho Man, etc.).