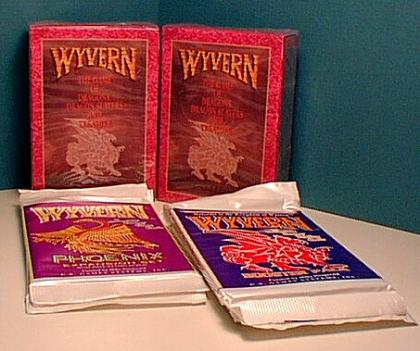 Wyvern, one of the first CCG's after Magic, is played with two decks. One deck holds your dragons and terrain cards. The other deck has your treasure cards and action cards.

To set up the game you take the top six cards from your dragon deck and lay them face down in two rows of three cards. Your front three dragons can fight the opponents front three dragons so you do have to be careful how you place. Flying dragons can fight over one row. Each player gets 25 gold (any markers you supply) and draws seven cards from their action deck. On your turn...

You draw a card from your action deck.
Place a treasure or replace a treasure. You may have up to two treasures per row.
You may change the position of one or two cards in your grid.
All players may play action cards one at a time around the table until everyone has played as many as they want.
You must choose one dragon to attack or replace a dragon or terrain card in your grid with the top card from your dragon deck face down. A dragon can attack a face up card or a face down card hoping he can beat it. Dragon numbers are compared and the strongest wins. A losing dragon or terrain is not replaced and you lose by losing all six positions.
A second action phase now ensues.
You must discard down to seven cards.