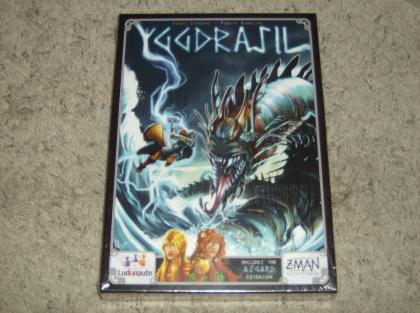 Yggdrasil, the “terrible steed”, a cosmic ash tree that supports the nine worlds, is in jeopardy. As the Ragnarök approaches, you, mighty among the Æsir and Vanir Gods, have to face the relentless advance of Evil Forces. You must sacrifice everything to prevent Evil from destroying Yggdrasil. The last battle, predicted since the dawn of time, is starting now. Your only aim is to repel the Evil Forces in order for Yggdrasil to survive this universe at war.

Yggdrasil is a co-operative game for 1-6 players. Playing the role of a Norse god, you must, with the other players, stop the advancing Evil Forces in Asgard.

Asgard contains twelve double-sided god tiles, with a god's usual power on one side and the Trance power on the other.