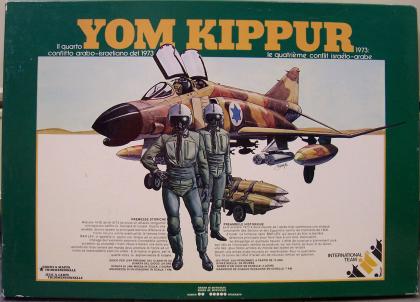 The game includes basic rules and advanced rules, and more complex aircraft managements rules. The 2 maps use hexagons to regulate placement and movement of units, and have overlays for the hills creating a 3D effect. The smaller map represents the area around the Golan Heights: the frontier region between Israel, Lebanon, Syria and Jordan. The Jordan River crosses the map from north to south, with the Galilean Sea in the middle. The big map represents the Sinai, focused on the area around the Suez Canal.

The basic game is only played on the Sinai map. Each turn corresponds to 2 days and is subdivided into 10 phases. The Egyptian player goes first, taking 4 phases. Then the Israeli player takes 6 phases. During each phase players can move their units. Combat takes place, using a calculation based on the number of units a player has.

The advanced game is played on both maps by 2, 3, or 4 players. The aircraft combat rules are introduced. The aircraft are divided into 3 categories: bombers, interceptors, and fighter-bombers. Each turn is divided into 9 phases. Arabian player turn has 4 phases and the Israeli 5.