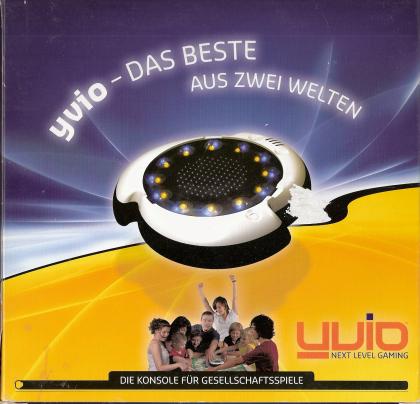 YVIO is according to the developers "the best of two worlds".

The 2 worlds they refer to are electronic and board gaming.
YVIO is an electronic console which is the basic requirement for different board games which act together with the components of these.

The console itself is equipped with a lot of little LED-bulbs, an SD-card-slot, a loudspeaker and some expansion possibilities. It is further accompanied by 4 coloured disks which have to be inserted into the playing pawns of the different games. They communicate via remote access with the console.
You have to buy boardgames containing the SD-cards with the gaming software and the traditional boardgame accessories.
The boards of the games contain electronic devices too, and these connect to the console via the disks, called "Yvies".
With every game comes also a so called "Yvio skin" which is laid onto the top of the console depicting the symbols for the keys you have to press to play the game and the action segments lit up by the LEDs.

If you liked the game "Die Insel" from the Ravensburger editors, Yvio is your cup of tea, but it offers much more different options and games.