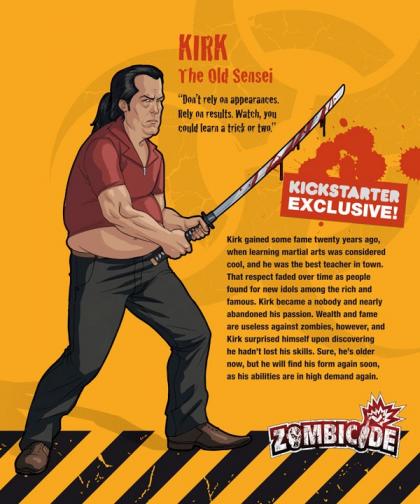 Kirk gained some fame twenty years ago, when learning martial arts was considered cool, and he was the best teacher in town. That respect faded over time as people found for new idols among the rich and famous. Kirk became a nobody and nearly abandoned his passion. Wealth and fame are useless against zombies, however, and Kirk surprised himself upon discovering he hadn't lost his skills. Sure, he's older now, but he will find his form again soon, as his abilities are in high demand again.

Kirk is a promotional survivor available to those that pledge a certain level for the Zombicide Season Two Kickstarter campaign. A zombie version (Zombivor) will also be included.