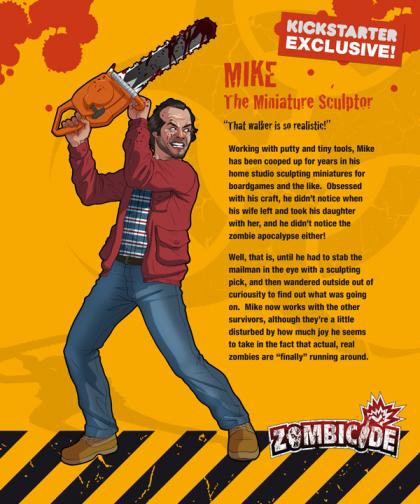 Working with putty and tiny tools, Mike has been cooped up for years in his home studio sculpting miniatures for boardgames and the like. Obsessed with his craft, he didn't notice when his wife left and took his daughter with her, and he didn't notice the zombie apocalypse either! Well, that is, until he had to stab the mailman in the eye with a sculpting pick, and the wandered outside out of curiousity to find out what was going on. Mike now works with the other survivors, although they're a little disturbed by how much joy he seems to take in the fact that actual real zombies are "finally" running around

Mike is a promotional survivor available to those that pledge a certain level for the Zombicide Season Two Kickstarter campaign. A zombie version (Zombivor) will also be included.