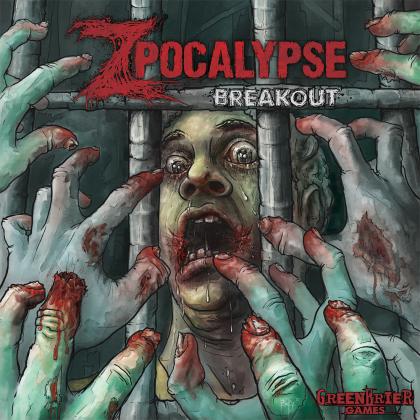 Zpocalypse: Breakout is a Print & Play teaser for its parent game Zpocalypse. It is intended to showcase the different aspects of Combat Phase in the main game.
Objective: make it out of the prison alive. In order to accomplish the objective you, the player, begin as a Squad using the Survivor Cards of a prison guard and an inmate inside a prison cell. You must collect the key and combination code from two different search locations. There are 3 search cards, one of which is the key to the door. You move your Squad around the prison game board attacking zombies that get in your path. When attacking you can use the weapons cards provided which tell you each weapon's attack abilities. Moving, searching and attacking all cost 1 action. Players may spend 2 actions, then zombies have a turn to move, attack and spawn. This cycle continues until you have collected both items you need. Once you have collected your items you can proceed to the locked door of the Warden's office. Only then can you open it (by spending 1 action) and escape the map. The game starts with 3 zombies on the board, and has the ability to spawn new zombies each round. Do not waste precious time as each turn a new zombie will appear and hunt you down!

Game play is solo, and takes about 20 minutes, give or take your untimely demise.