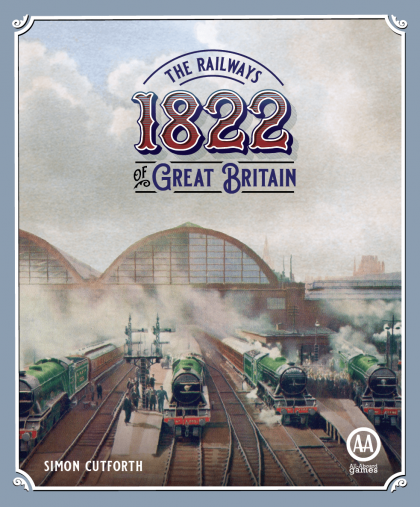 1822: The Railways of Great Britain

1822 is a game in the 18xx series based on the growth of the Railways through the age of steam. It is based on a map of most of Great Britain, excluding north Wales and the Scottish Highlands.

Players take the part of investors in Railway companies and then operate the companies to maximise their own wealth.

The game has several McGuffins...
1. There are private companies, minor companies and major companies (released as concessions in the bidding rounds). These are released in tranches in random order.
2. The bidding mechanism is "Lawsonian" whereby players can bid on a limited number of the companies on offer and all of the bids are resolved simultaneously.
3. A new type of train is introduced: a Local train which runs on its home station.
4. Major companies have historical destinations.
5. Major companies can acquire any minor companies to which they are connected (if the owning player agrees) allowing very flexible and variable game play.
6. There is a strong incentive on players not to spend all of their initial capital in the first stock rounds.