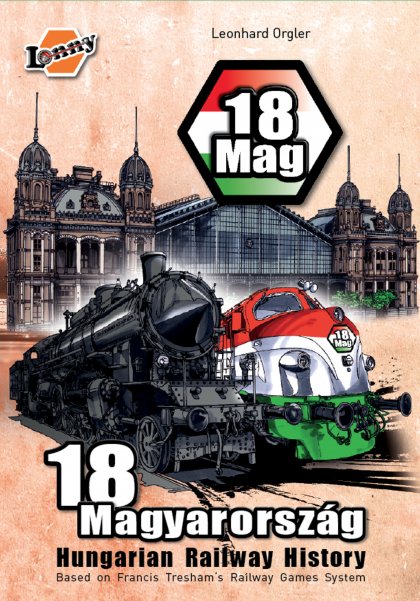 18Mag (Magyarorsz&aacute;g meaning Hungary) is an 18xx game that tells the story of Hungarian railroads and their supporting companies.&#10;&#10;Depending on the player number, 13 different railway companies are drafted equally between the players. These railways operate in numerical order, build track on the map, erect stations, run their trains and always pay out their earnings 50:50 &ndash; half to their owners and half into their own treasury.&#10;&#10;Beside those operating railroads, seven other companies offering various services for the railroads are included in the game. Examples of these services are building an extra tile, allowance to run freely over small stations, reduce costs when building bridges and tunnels, and most importantly, offer new trains. Whenever a railroad uses the services of one or more of these companies, they pay their fee into their treasury. In stock rounds, players acquire shares of those companies and after operation rounds, they distribute their earnings among the share holders. These companies also have station markers (or in this case: factories) which can be placed on city tiles (instead of railway stations) by the president of the company, thus denying other companies passage through that city.&#10;&#10;Contrary to other 18xx games, all trains are available from the beginning. Because of the pricing, they usually come in the accustomed order, but not necessarily! However, trains do not rust or go obsolete, but they may be scrapped voluntarily to make space for bigger trains. When the first 6-train is sold, one more set of operation rounds is played and then the game ends. As usual in 18xx games, the wealthiest player is the winner.&#10;&#10;