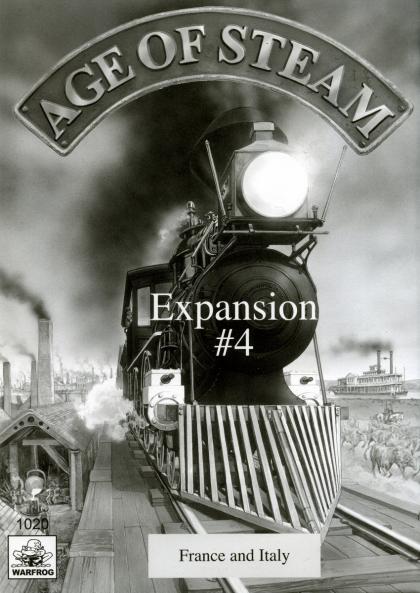 This Age of Steam Expansion #4 contains a two-sided board with France and Italy.

France : Paris is a multicolor city with very strong goods growth (represents 1-6 Black on the growth chart). Many actions have changed : Urbanization is weaker, Production stronger and you need the engineer to build on mountains.

Italy : there are no "towns", only cities and you can not build new cities (no urbanization). You can only build one complete link per turn (no hex limits). There is no more share limits and penalty for issuing shares is less than usual. Also, beware of the black goods, as their movement can decrease your income.

This Age of Steam expansion was first released in a limited Essen Set edition at Essen 2004 by Winsome Games. It was re-released at Essen 2005 by Warfrog in a hard map edition with a print run of 3000 pieces.