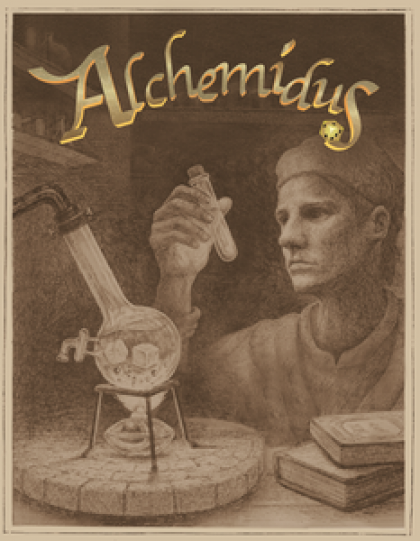 Descrizione tratta da Boardgamegeek:
In Alchemidus, players try to extract gold by manipulating alchemic formulas drawn from 15 pages of a book of magic. By modifying dice rolls, players puzzle out which processes produce gold. Whoever can get the most gold at the least cost is the winner.

In more detail, Alchemidus is a speed puzzle, with players trying to be the fastest to find the cheapest way to convert clay to gold.

The game has four pairs of d6 dice, in gold, lead, clay and white to show the process. The 2 gold and clay dice, and 1 of the lead dice are rolled and placed on their respective marker cards. The players must figure how to progress from the two clay numbers, to the one lead number, and then back to the two gold numbers.

Each spell card has a number on it, the cost of using that spell. The numbers go from 0 to 5 with five cards being 10 and one being 20 (Get any value die). Players must read the spells and quickly figure out the lowest cost method of going from clay to gold. It should always be possible, the spells have sufficient variety and there's enough of them.

When one player declares a cost, the others have a little time to declare a lower cost. The player that proves the lowest formula wins the round.

The game is well made, the dice and card stock are good quality. The game comes with Japanese rules only but the spell cards are all in English mainly, with notes in Japanese. The spells are sufficiently obvious, gamers will not have trouble figuring them out.