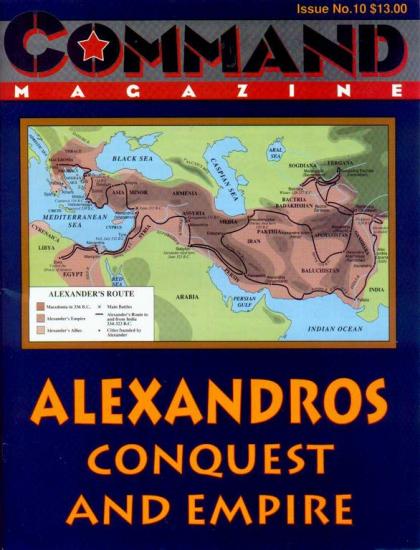 A game of the conquests of Alexander the Great from 334-323 B.C.
One player takes command of the Macedonians and the other leads the Persians. They fight over provinces in quarterly turns. Combat can be fought tactically, using a separate display reminiscent of the way of resolving combat in Eagle games, with units assigned to various sections of the battlefield. Units which survive tactical combat can lay siege to cities.

The game can last varying numbers of turns, depending on the course of the war. There are several conditions, including the death of leaders and conquest of overwhelming numbers of provinces, that can end the game early. Otherwise the game ends in the summer of 323 (when Alexander actually died) or in an optional scenario, keep going up until 318 if Alexander survives that long.