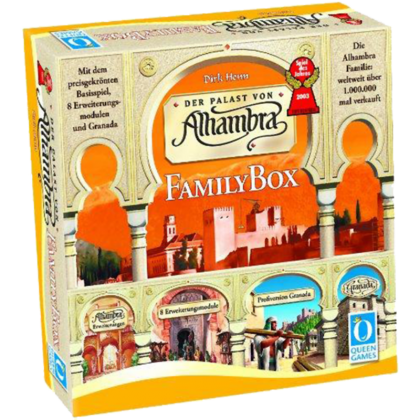 Players with the most buildings in each of the six building types score in each of the scoring phases, and points are awarded for players' longest external "wall" section within their complex. The game ends when the building market can no longer be replenished from the building tile supply, and there is a final scoring, whereupon the player with the highest score wins.

This particular box, The Family Box, comes also with The Vizier's Favor expansion and a Pro version of Granada game.

1. The primary module is "The Vizier's Favor", which allows players to buy a building out of turn but has to be paid with exact amount.

2. "The Builders Huts" (Die Bauhütte) introduces a number of new tiles that only count in the scoring when other tiles of the same color are built next to them. Hut tiles are free, but their number is limited to three per player.

3. With the "The Currency Exchange" (Wechselstube), players can buy building tiles by mixing different currencies.

4. The fourth module is a set of bonus cards that are dealt to the players. Each of the tiles shows a particular building. If the matching building is part of your Alhambra, then the bonus card can be revealed and will count as another building of that category.

About Granada, also called as Alhambra Advanced: it is a standalone game the players develop the city of Granada next to Sierra Nevada, where the famous Alhambra stands, by buying building tiles to construct the city which will earn the most victory points. Building tiles now have two sides and there are new building types for which the value is set during the game.