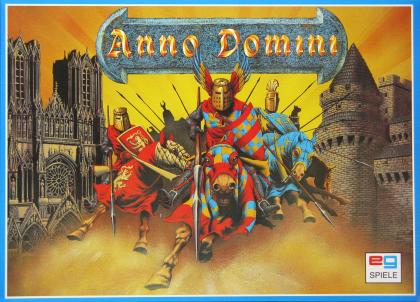 Anno Domini is a wargame for four players and consists of a map board, a deck of cards, 12 dice, cardboard coins, miniature castles and cathedrals and a rule book.

Players start by randomly selecting a Pope and proceeding with the random selection of all 36 territories. These are claimed by placing a castle and cathedral on the specified area of the map board.

Play commences with the Administrative Phase where players collect taxes based on the number of territories and cathedrals they control. Following is the Military phase that is divided into three optional steps. The first is to roll 2d6 for a random event that will cause the player to either gain or lose money, lose cards, lose castles or become the pope. The second option is to build new castles on your territories. The final is an attack on another person's territory.

Territories can attack adjacent territories or those on the same body of water. The attacking and defensive force are determined by the number of castles on each territory. For each castle on his/her territory, the attacker and defenders each roll a die and apply any modifiers obtained by cathedrals or cards in his/her possession. Results of 6 or over destroy a castle of the opposing side. If all of the defenders castles are lost, the attacker wins the territory, places a castle to claim it and may draw a card at the end of the phase. Cards offer various benefits such as money, attack/defence points or game actions.

... and apparently the castles are cute.