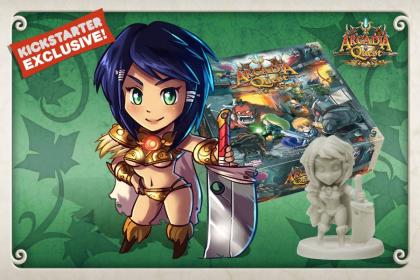 This is a set of Kickstarter Exclusive Heroes that every backer at the Guildmaster level or higher received, consisting of: Sonja, Montoya, Koba, Hitch, Viktor, Pluck, Morgan, Prince Aaron, Monkey King, Monkey Queen, Queen of Beggars, King of Thieves, Black Newt, Nameless as Hero, Heartless as Hero, Lord Fang as Hero, Lydia as Hero, Lilith as Hero, Sting as Hero, Bowie as Hero and Chooloo.

“Go ahead and look. Sure, just stand still. Riiiight there. Ignore the sword. Watch the girl.” CHOP! WHACK! HACK!

As a young Guildswoman, Sonja heard about the renowned Armor of Invulnerable Offense. It was said to convey superior protection to its wearers, and had helped more than one warrior woman to achieve fame and glory. Sonja relentlessly sought this legendary suit of armor, and eventually tracked it to a dungeon not far from Arcadia. But, when she found it, she couldn’t believe her eyes! It was little more than a golden chainmail bikini!

Incensed and annoyed, she figured she might as well try it on. Alas, the Armor of Invulnerable Offense proved all too true to its name. The cursed armor could not be removed! Thus, Sonja discovered the true secret: The worst defense requires the perfect offense. Many years later, she has proven the truth of these words. … Though she’d still really like to get rid of that armor.