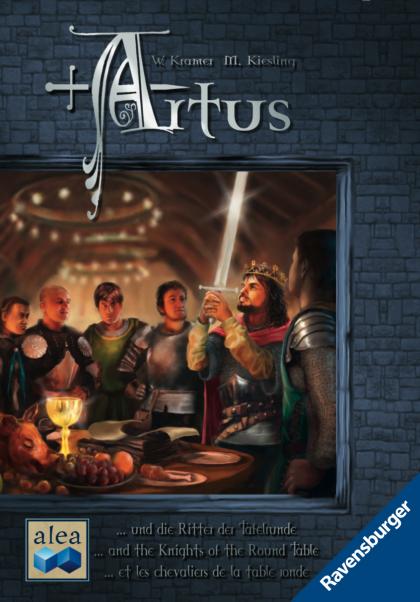 In Artus, the round table of legend is a turntable in the center of the game board with a space marked with a crown for the king, numbers on the edge from +10 to -15 counter-clockwise from the king, and a few spaces worth 0.

Each player has six cards in hand – two knight cards, two royalty cards, and two scoring cards – and plays two cards each turn. By doing this, players are able to place figures of their color or neutral figures around the table, score certain areas or figures under certain circumstances, and place rings on neutral figures or to move them. The neutral figure bearing three rings is the current king, and the table is always oriented to place this figure in the crown location. A new king can come into power though, which will find everyone sitting in a new location.

The player with the most points after eleven rounds wins the game. Artus has two sets of rules: basic rules for families and casual gamers and "professional rules" for more experienced gamers.