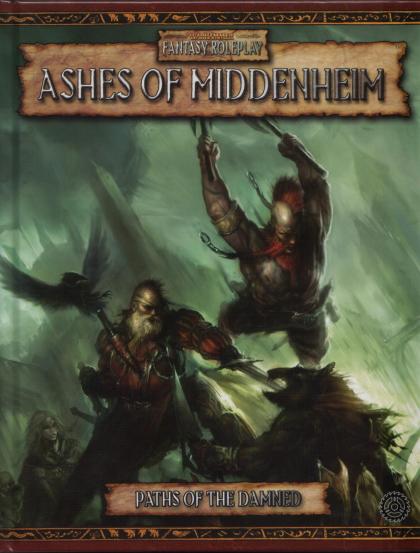 The first adventure in the Paths of the Damned campaign, set in the city of Middenheim. The scenario follows on from 'Through the Drakwald', the introductory adventure in the WFRP2 rulebook.

From the back cover:
"The ashes still cool and the wounds still heal after the onslaught of Archaon and the forces of Chaos Undivided - but Middenheim still stands! Perched atop the massive height of the Ulricsberg, the defenders of the Empire threw back the Chaos hordes.

But all is not well in Middenheim. Corruption eats at the very heart of the City of the White Wolf, and it's up to your heroes to help root it out. It all starts quietly enough, with the Player Characters charged with delivering an ancient icon to the Temple of Sigmar. But they are quickly plunged into an action-packed adventure involving heresy, murder, betrayal, and the scent of corruption most foul. Set after the events of the Storm of Chaos, Ashes of Middenheim proves that the followers of the Ruinous Powers are far from finished.

Ashes of Middenheim is part 1 of Paths of the Damned, the new epic adventure trilogy for Warhammer Fantasy Roleplay. In addition to the adventure itself, this book also contains a full description of Middenheim, including a detailed city map and descriptions of neighbourhoods, key NPCs, and a host of important locations.

What dire plots fester in the City of the White Wolf and what can a group of unlikely heroes do to stop them? Find out in Paths of the Damned: Ashes of Middenheim."