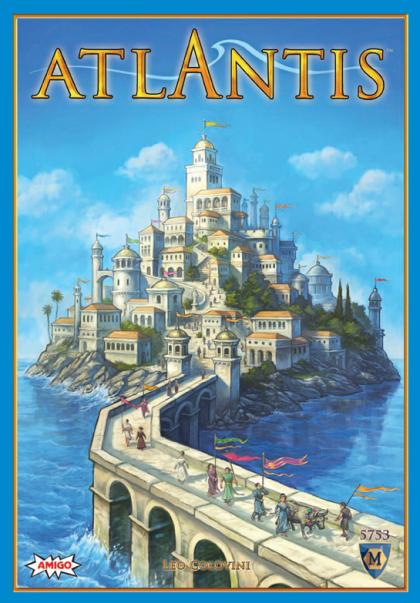 More than 2,000 years ago Plato told the myth of the splendid city of Atlantis, which was sunk in the sea.

In this family game the players, by skillful placing of cards and the building of bridges, try to leave the city of Atlantis in order to reach the solid ground with as much treasures as possible.

The city of Atlantis and the solid ground are interconnected by land tiles. The players receive cards with several drawings, land tiles with those drawings, all pawns of a color as well as a bridge. In your turn you can discard a card with any drawing and go with one of your pawns to the next tile with the same card drawing. At the end of your turn, you can take the tile left behind and put it in your hand as victory points. The player puts a water tile into the gap created and draws a card from the deck the pile. So every turn there are more water tiles and it's harder to overcome the gaps, players can go forward using their bridges or paying victory points with your collected tiles. When all players have saved his three pawns safe ground there are a recount. Who reaches safe ground with most victory points wins.