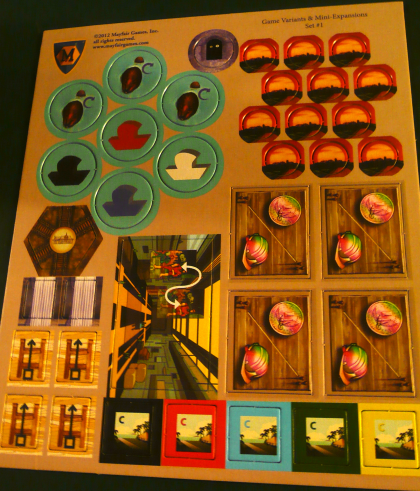 Nuns on the Run: The Anchorite - This token is used in a game with only 1 or 2 Novices to effectively shrink the size of the board. In a 4 player game it can be used to change the landscape a bit.
Giza: The Great Pyramid: Fast Sleds - This gives players the opportunity to potentially push two sleds on their turn.
Lords of Vegas: Sky Bridge / Building Boom - adds the option to use the 2 provided skybridge tokens.
Atlantis: Boat expansion - A mayfair version of the small expansion which was a free give-away at Essen 2009. This one has cardboard chits instead of wooden ships. The boats function more or less like the bridges in the base game, but you can use other people ships to cross, by paying the correct amount to the bank or half the amount to the player whose ship you use.
Rocket Jockey: Space Port - adds variants to mid game scoring and alternatives when drawing cards.
Urbania: Subsidy Contracts - Adds tokens that can be used either in hiring or as extra workers. Also adds "Italian Politics Variant".
Catan: Victory Point markers - Victory point chits.
Steam: Five Way Town - This tile adds five track access into one town.
Whitewater: Cranky Beavers - This expansion adds a movable obstacle into play, the Cranky Beaver, and gives options for a Sudden Death Ending and a Rough Rapids variant.
Aeroplanes: Aviation Ascendant: Charters - This expansion adds ways to enter a city without being closed out.