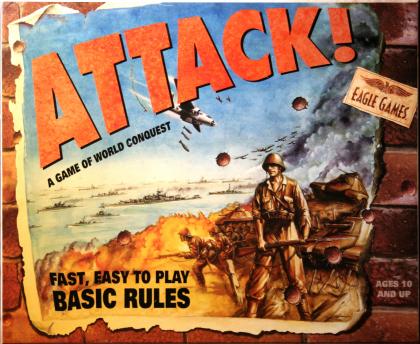 The basic game (Attack!) is a very simple game of expansion and conflict set in the World War 2 era. It is aimed at those game players who enjoy rules that are very simple and easy to get into. The game is not intended to be a simulation of the era, but immerses the players in the flavor of the period.

Gameplay:
Each player starts with a few regions (one of which is his capital), and a few military units. Players expand their power bases by adding regions to their "sphere of influence". This may be done either through diplomacy (they join willingly), or military conquest (they join, period).

There are three major sub-games in Attack!:
1) Land Combat: A simple system where each unit has certain advantages based on its historical role.

2) Sea Combat: A simple system where each ship type (Battleship, Carrier, Destroyer, and Sub) has certain advantages based on its historical role.

3) Economic: A simple system determines production. The player starts with one card per region owned, and then gets a new one for each new region added. The cards come in four basic flavors (suites): Resources, Factories, Transport Network, and Oil. Each card has a value printed on it that represents the base economic value of that region. If the player is able to create an entire "set" (one of each suite), he doubles the printed value on those cards. There is also a fifth type of card which has a minimum value of "1" that represents a region without any special economic value (just "population").

The units include: Infantry, Tank, Artillery, and Air. These are high quality plastic minis, which come in two sizes: regular for only one unit and slightly larger for groups of five.
The map shows the world circa 1935 centered around the Atlantic (North and South America, Europe, and Africa). The expansion contains the map of Asia, Australia, and the Pacific.