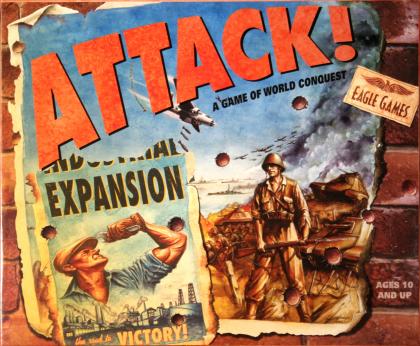 From the publisher's web site:

Attack! Expansion will add quite a bit of detail while retaining playability. Players will be able to choose from many new options including (They will get 3 per turn): Moving Military Units, Playing Political Cards, Attempting a Diplomatic Blitz, Beginning a Trade Route Auction, Purchasing Units, Researching a New Technology, Trading with another Player, or a Strategic Move (Land, Sea, or Air).

Politics: Each player nation and each minor nation will have one of the four political affiliations: Fascist, Monarchy, Democracy, or Communism. Political cards will allow the players to influence the minor nations governments with propaganda, or even overthrow them in an attempt to install a friendly government that they can then influence to join their "sphere". Other diplomatic cards will allow players to spy on each other or perform various internal political actions.

Trade Routes: Players will be able to bid on Trade Route cards. The highest bidder gets the card. Trade cards act just like any other economic card, except they are "wild cards" and may be used to create sets. They also usually have higher than normal economic values. The downside to Trade Route cards is that they may be blocked or destroyed by blockades or Submarine warfare.

Technology: After the initial expansion, players usually begin to build alliances and the wars begin. Having a technology that gives you an advantage on the battlefield is critical. Players may spend an action (and money) attempting to develop a special technology.

Oil: Oil also takes on its historical importance in Attack! Expansion. Every time a player moves tank, air, or naval units, they must spend oil units from their reserve. The oil reserve may only be replenished when oil cards are used to do so rather than used in a player's economy that turn.

Attack! and Attack! Expansion will contain the same quality art and components featured in other Eagle-Gryphon Games products.