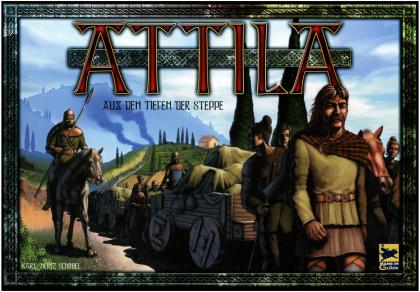 In 375 A.D., Attila's mounted Huns overran Europe causing the Germanic tribes in their path to flee and penetrate the outer provinces of the declining Roman empire. In Attila, the players influence the migrations of the Germanic tribes to the Roman empire. The winner is the player who has exerted the best influence on the most successful of the tribes.

Players have a hand of cards which correspond to the invading tribes. A turn consists firstly of playing a card and placing the matching tribal marker onto an area of the board, expanding from their start areas, then secondly either repeating this or increasing their influence in that tribe. If a province now contains 5 tribal markers in total, war breaks out between the tribes. The basic strength of each tribe is the number of markers there, but each player can add matching cards from their hand to boost this. The weakest tribe is eliminated (or rather, all tribes with the lowest total), leaving the province at peace and with no possibility of further tribal markers being added. Scoring occurs four times during the game at the end of each century; the first century ends after one war, the second after a further two and so on. The player with the most influence in each tribe scores 1 point for each tribe marker, the player in second place scores one point per area the tribe is in (thus if there is only one tribal marker of one sort in each area both 1st and 2nd will score the same). The influence a player gains increases in each century, so large swings in control are possible.

Players are thus aiming to expand tribes in which they have the most influence (and conversely, are gaining influence in the tribes they expand) whilst at the same time trying to manipulate the timing and provinces where wars happen with a view to protecting their own favoured tribes and eliminating others. Gameplay is therefore not just about playing out as many of 'your' tribes as you can as you will need matching cards to defend with, and in any case may simply not have the right cards in hand. And sometimes you will want to provoke a conflict, for example by adding a tribe you don't have much influence in to finish an area where one of your favoured tribes is strong.