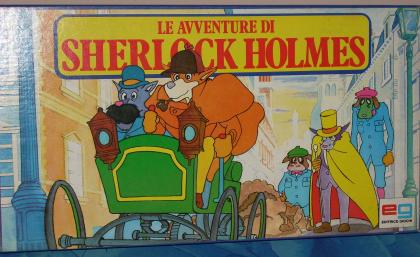 The preparation of the game is limited to the allocation of the characters and the placement of tokens clue.
The characters represented are 6, Sherlock Holmes, Watson, Lestrade, Moriarty, Hudson and the couple Todd and Smiley, that those who remember the cartoon certainly recognize, and each have two cards, so you could find with two players represent the same character.

The course, as befits a children's play is very simple, and everyone in their turn will only turn the "roulette" and see which of the nine squares of the board will go to search for clues. Seven of these boxes are red and starting the game with three tokens clue places on them, a blue box used to have the 21 coins in excess, and the yellow box is the "waste".

When a player comes in a red box, to check whether one of the tokens present there is one depicting one of its special character, in which case he must take it and place it face down in front of him. If it finds the first token must then catch the blue box and keep it the same way ahead in case corresponds to their character, or discard it in the yellow box otherwise.

The game continues, until it is emptied a red box or blue box.
Then the player who drew the last coin, discovered the chips has previously collected (if it has, otherwise you go to the next player) and becomes the examination. The other at this point watching the chips and consulting support control, they must understand what the character looked, and as said before, who first guesses wins the game. If anyone guess, the player who collected more tokens, and in this case is virtually impossible to win the examiner, because even if he had collected a lot of chips, surely the many tokens collected would go to "unmask".