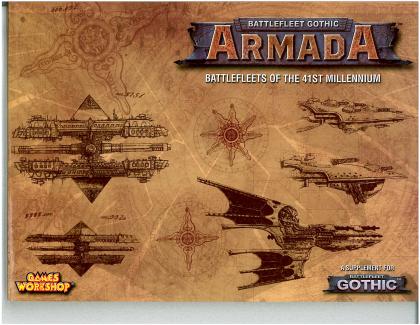 The only expansion for Games Workshop's Battlefleet Gothic; Armada both expanded the fleet lists from the base game and introduced fleet lists for many of the factions that were not present in the original game- although some factions received as few as two ships.

Many new technologies were also introduced, such as all-around area of effect weapons (mostly due to the fact that new alien races were now in the game that were not present in the Warhammer universe when Battlefleet Gothic debuted, i.e. the Tau). As with all Games Workshop products, a fair amount of background and flavor text is present in the book, expanding the space battles beyond the scope of just the Gothic War.