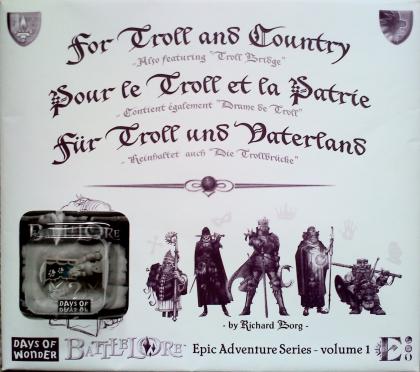 BattleLore: For Troll and Country

The first installment in our series of Epic Adventures for BattleLore features two ready-to-play Adventure Maps in Epic format: For Troll and Country and Troll Bridge.

Each oversized map is ready-to-play with all terrain, obstacles and unit starting positions pre-printed - just add figures and play. It also features the adventure rules, summary cards and historical background. All this in English, French, and German.

The Troll's Creature card and the Stone Bridge card (printed on the map) were initially provided as PDFs on the company's web site. The Troll Creature card was later supplied with BattleLore: Dragons.

Voti e commenti per BattleLore: For Troll and Country