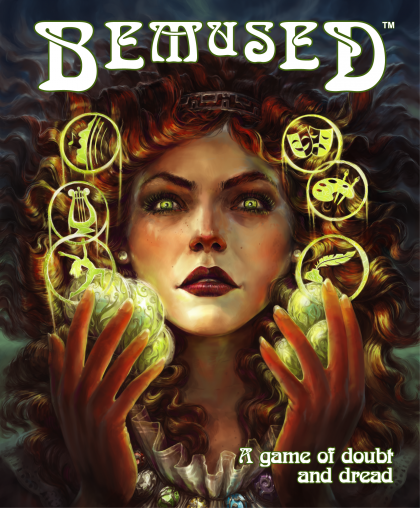 Bemused is a card game for 4-6 players in which the players take on the role of a muse seeking to elevate their chosen human virtuoso to the greatest height of celebrity and influence. To do so, the muse must eliminate their virtuoso's rivals by levying doubts and dreads upon them until they are driven insane...or worse.&#10;&#10;Bemused is not a social deduction game. Although there are elements of deductive reasoning, Bemused is a social interaction experience that encourages shameless table talk, bluffing, and deal-making as players seek to maximize their scores in a &quot;take that&quot; environment. Bemused is best described as a strategic &quot;ruin your rivals&quot; game with hidden goals and asymmetric player powers. It is also a much deeper strategy game than it first appears.&#10;&#10;Each player has a virtuoso card that designates their human prot&eacute;g&eacute; and a hand of doubt and dread cards. Each turn, the player draws two doubt cards for their hand, places a doubt or dread card from their hand onto a virtuoso card, then discards a card from their hand. In some cases, a player may play two doubt cards from their hand, but this action permanently reduces their hand size. Each virtuoso has an ability that their muse may use, such as change a dread to a doubt or move a doubt from one virtuoso to another. Scheming, negotiating, and table talk are encouraged!&#10;&#10;When a virtuoso is saddled with a combined total of five doubt and/or dread cards, the virtuoso is driven insane. An insane virtuoso still gets their turn and may still win the game, but their options for which cards they may play on their turn is limited by their insanity. If an insane virtuoso has more dread than doubts, that virtuoso dies and becomes a fantasma that haunts the remaining living virtuosos. A fantasma may still win the game!&#10;&#10;Each muse's prot&eacute;g&eacute; also has a gemina, a secret virtuoso in the game that holds a psychic link with their prot&eacute;g&eacute;, and a secret that describes how their prot&eacute;g&eacute; feels about their gemina, and how the player's score will be affected by the state of their prot&eacute;g&eacute;'s gemina when the game ends (e.g., the player may gain points if their virtuoso's gemina is not insane at the end of the game). Once a virtuoso's gemina is revealed, a player may use the gemina's ability as well as their prot&eacute;g&eacute;'s ability! A player may also reveal and use their virtuoso's gemina for a price... but whenever a virtuoso goes insane, their gemina automatically flips over and can have severe consequences for play...&#10;&#10;