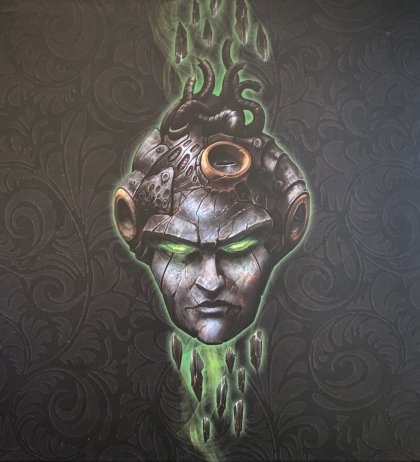 Crono is a construct from many eras ago and is the keeper of the Black Rose Lodge in Prague.&#10;Over the years he has often been mistaken for a Titan or giant, but few have lived long enough to tell the story of their encounter with him.&#10;Crono is nourished by the vital energy of his victims. He is unable to synthesize the energy he needs on his own, so he sucks it out of his prey. In fact, it isn&rsquo;t uncommon to see a dying body hanging off his flesh... before meeting its own tragic end. &nbsp;&#10;The legendary scenario to which Crono is linked takes place inside the Black Rose Lodge in Prague where the &ldquo;Lodge&rsquo;s Vendetta&rdquo; room is found, replacing certain game boards in the core box.&#10;Mages brave enough to venture into this legendary encounter will have the possibility to use one of the 4 activation tokens of Crono&rsquo;s room once they enter.... at their own risk and peril.&#10;&#10;