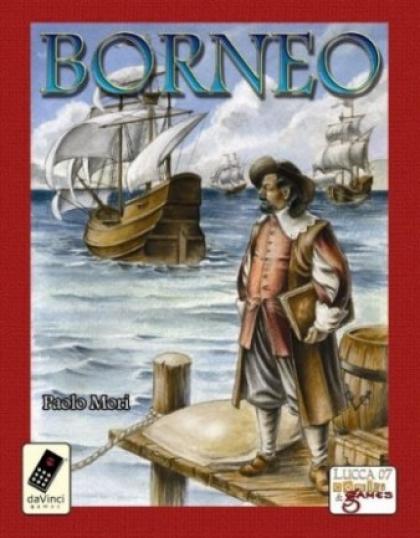 This game has been published by dV Giochi as a reward for winning the 2006/2007 edition of the Gioco Inedito – Best Unpublished game contest. Powered by Lucca comics & Games and dV Giochi, the contest aims to identify the best new card game design from all prototypes received and to reward it by publishing the game in a fully professional and high-quality format, overseen directly by dV Giochi. All prototypes submitted must conform to the technical and style requirements, fixed components and a given theme which changes every year. Everybody can join the contest and this is a great opportunity for emerging game designers to see their idea published.
For more information:
giocoinedito@luccacomicsandgames.com
www.luccacomicsandgames.com

Players hold the role of merchants involved in the commerce of spices with the East Indies in the XVII century. Each merchant is a member of a number of different Merchantile Companies: it is therefore important to achieve the best position in the hierarchies at the right time, when the profit from the expedition is divided among them, either by monopoly of a single company or by shares of different companies.

The same cards are used in three ways: to gain the control of a company on a certain harbour, to struggle for the status inside of a company, and finally as trade goods to collect to dispatch orders.

The game is the winner of the Best Unpublished Game contest of Lucca 2006.

The first limited edition has been published in form of a card game.

The current edition has been expanded with more rules and materials to become a board game, containing: