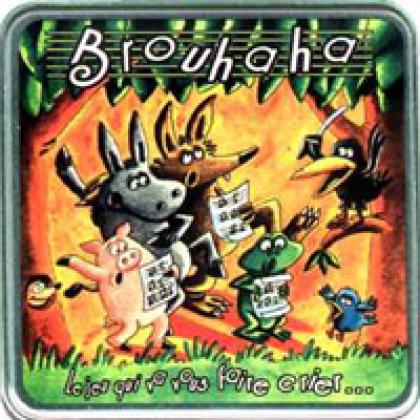 Here's a description of the game from Cocktail Games:

Brouhaha is a game by Jean-Marc Pauly which interested us because of it's intergenerational nature, as well as the pleasant ambiance it generates around the table. The basis of the game is simple but highly effective: 42 Animal cards (21 pairs) and 4 Hunter cards are dealt out among the players. Each player then takes his cards into his hand without showing them to anyone else. Each player chooses a card and plays it face-down in front of himself. He then tries to mimic the cry of the animal on the card he has chosen, with the objective of finding its mate.

As soon as two players think they share the same animal, the both knock the center of the table. This action suspends the game while the players check to see if they were correct. If they were, they are awarded their respective cards.

At any time, a player who can't find his mate may take his card back into his hand and play out another, henceforth imitating the cry of the new card's animal instead.

Players have to watch out for the Hunters, which let one imitate an animal's call...

A game of hilarious cacophony for players 7 and up and which has an impressive variant intended for 42 players.