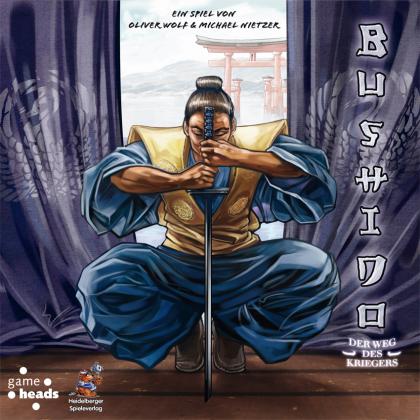 In Bushido: Der Weg des Kriegers (the subtitle means "Way of the Warrior") players take on the roles of Daimyo, feudal lords in medieval Japan, and compete to become the next shogun of the empire, who gets appointed by the emperor. And this truly has to be an honorable man.

Basically this game is all about resource management and conflict, but unlike other games in this category you won't necessarily win, if you conquer the most areas. Your main goal is to earn enough honor, which can be achieved in different ways. There are two kinds of honor. 'Daimyo-Honor' is the victory condition and can be directly gained by holding provinces, and indirectly by transforming 'Samurai-Honor' at a set rate. 'Samurai-Honor' is gained by winning a defensive or offensive battle. It can be transformed into 'Daimyo-Honor' with a tea ceremony.

The first Daimyo who earns 50 points of honor wins the game. If this goal is not reached within 12 turns, the Daimyo with the most honor at that point wins the game.

What needs special mentioning is the turn mechanism of the game, which is really cleverly-devised: depending on the number of players, different 'offices' are in the game that get assigned to the players. In a 4-player game these offices are:

Daimyo: The active player. For clarification: in game terms, every player is a Daimyo, but only the active player acts as Daimyo. The Daimyo, as active player can restock his resources, attack a province and play special tiles. Most importantly, he assigns the other offices to his opponents.

Samurai: The general. He will lead the attack in the Daimyo's name. He can earn 'Samurai-honor' with a successful attack.

Bushi: the poor guy who is attacked by the Daimyo. He can earn 'Samurai-honor' with a successful defense.

Sensei: He gives council to the Daimyo. Tricky position, because his council can do the Daimyo harm or good. He can cancel an attack, spy on other players, use Ronin to destabilize a province, and suggest to the Daimyo how hard to punish his Samurai when he loses a battle.

The battles are resolved by a system that depends on the number of troops and a rock-paper-scissors element. The opponents have the possibility to improve their odds by investing some of their resources.

The tricky part of the game is that most of your actions depend at least partly on the goodwill of one of your opponents. For instance the Daimyo depends on the Samurai to win, but the Samurai will only do this, if he sees enough gain for himself. This makes the game very interactive, with much discussion and haggling at the table.