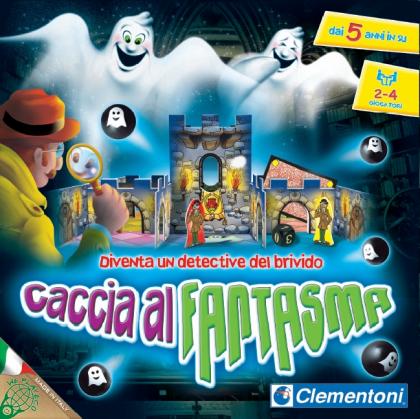 An observation, memory and dexterity game for 2-4 little detectives.
Inside the box there is a castle with ghosts, and a tower in the middle. The ghosts are encrypted cards, hidden in the castle’s walls and players can see them thanks to a special red lens.
Inside the tower there are 4 bags, one for each player.

Players have to find the ghosts and try to drop them from the tower inside their bags.
During the game, each player has a target ghost.
During his round, the player moves his detective in the room he wants. He looks with the special lens the ghosts in the room.
After 10 seconds, the player can indicate one ghost:
- if it’s the same ghost of his target, he takes 3 little ghosts (each ghost is a small ball). He tries to put them in his bag from the tower. The player draws a new target ghost.
- otherwise, if it same ghost of another player, this player will drop 3 little ghosts. This player draws a new target ghost.
- if nobody has the ghost, the other players will drop 1 little ghost.
If the player thinks that his ghost isn't in the room, he doesn't choose any card: nothing appends.

When targets or little ghosts finished, the game ends.
Players remove the castle and look at the bags: the player with more little ghosts wins.

Ideale per giocare con i bimbi!