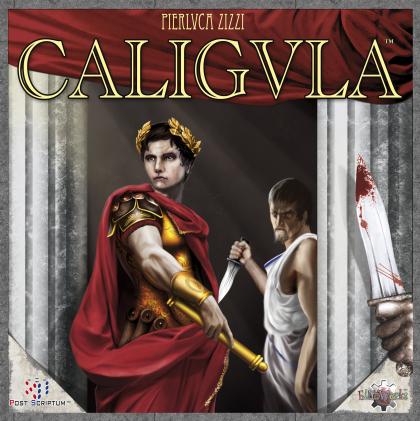 It is the year 41 AD. The emperor Caligula has finally gone too far. An occasional political assassination you can understand, but his personal habits are too much to bear! It’s time that somebody step in and deal with the madman before it’s too late. And if you should happen to profit at the same time you rescue the Republic, well, who could complain about that?

Caligula puts you and your friends in the togas of the true powers in Imperial Rome: the guys holding the knives! Send your legates throughout the empire to further your own plans and seize valuable opportunities. Keep a wary eye on your rivals and make them pay dear for their gains. Marshal your resources with care, and when the moment is right, strike! Secure your favorite on the throne, and all the wealth and glory of Rome will be yours for the taking!

Caligula is the first game by Italian designer Pierluca Zizzi, and the sixth title from the up-and-coming young publisher Post Scriptum. ElfinWerks is pleased to be able to bring this exciting game of plots and politics to America. Do you have the savvy to navigate the treacherous politics of the Eternal City? Or will your rivals leave you banished from the halls of power? Take up your knives for the Republic (And for yourself!) in Caligula!