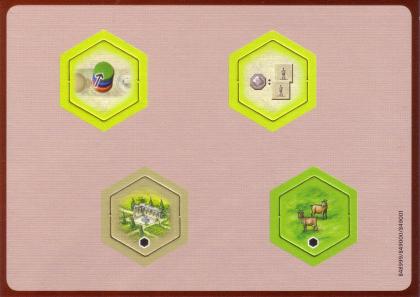 New expansion from the Spiel fair in 2012

This expansion consists of 4 new hexes (Park, Goats, Sequential Order, Worker tiles) that are mixed into the corresponding supplies (black and yellow).

Park (Building/Beige): When a player adds the park to their estate, it can function as any building. For example, sell some goods (warehouse), or take 2 silverlings (bank), etc.
At the end of the game, the park may be additionally used per the corresponding knowledge tiles (16-23), as any single building (even if different than originally declared) for scoring purposes.

Goats (Animal/Light Green): A player adding the goats to their estate counts them as any animal (swine, for example.) If other animal tiles are later added to that pasture, the goats will always count as 2 additional Victory Points, even if as a different animal type than originally scored.
At the end of the game, the goats also count as an additional animal type for knowledge tile 24.

Sequential Order (Yellow): The player who adds this yellow tile to their estate is now always at the top in the sequential order lineup with their playing piece. This is the case whether actively or passively (even if another playing piece would get there and normally be on top.)

Worker Tiles (Yellow): When a player adds this yellow tile to their estate, they can now purchase worker tiles from the general supply at any time. The cost is 1 silverling for 2 tiles.

NOTE: You must have the base game The Castles of Burgundy to enjoy this expansion.