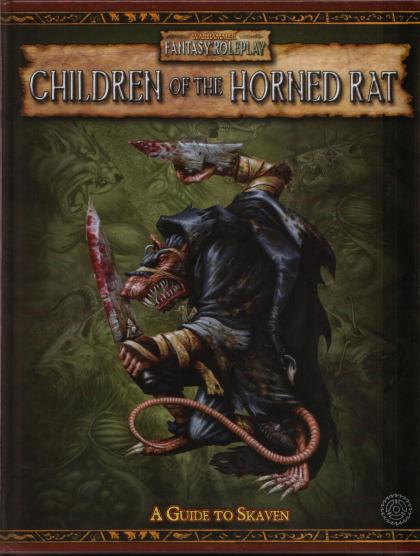 Children of the Horned Rat

From the back cover:
"Children of the Horned Rat reveals the secret world of the loathsome ratmen, serving as the essential guide to all things Skaven. Inside this exciting tome, you'll find everything you ever wanted to know and more, including:

- Extensive information on how the Skaven are perceived in the Empire and the rest of the Old World including myths and legends.

- A physiological overview of the Skaven, with detailed notes on the various breeds of the foul Ratmen.

- A detailed history of the Skaven and their exploits.

- Full disclosure on Skaven society, detailing how the Ratmen think and act, how they view each other and other races.

- An examination of the Great Clans and details on six Warlord Clans.

- Detailed descriptions of Skaven settlements including a sample warren: Under-Delberz.

- New Skaven weapons like the tail blade and the Poisoned Wind Globe.

- Extensive rules on Skaven Magic including a slew of new spells like Crackling Doom and Skitterleap as well as rules for creating and using Skaven technology.

- Guidelines for playing Skaven characters including over ten careers like the Grey Seer and Warlock Engineer.

- Several new monsters like the Bonechewer and Rat Mother.

- And an all new adventure by Chris Pramas!

The perfect accessory for any game set in the Old World, the Children of the Horned Rat exposes one of the gravest dangers the Empire faces. Don't believe the lies. The Skaven do exist and they will make slaves of us all!"

Voti e commenti per Children of the Horned Rat