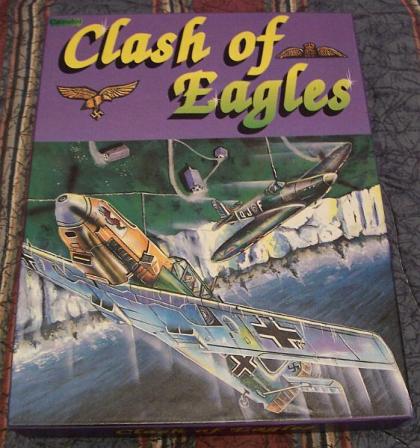 Camelot is an Italian game company, hence the hiccups in their description of the game: "[A] game that tries to reproduce the dogfights during the Second World War. Each player cover the role of one or more fighter or bomber pilots and must execute his mission; usually it consists of the classic dogfight when the only rule is engage enemy fighters trying to shoot down more planes than the enemy bringing back home your skin and your plane. The presence of some bomber within the `furball' can give you more interesting mission to complete."

Clash of Eagles is a tactical air combat game with each counter portraying a single aircraft. Each map hex is 80 meters across and a turn is 20 seconds long. The game uses mechanics similar to GDW's popular World War I air combat game Blue Max.