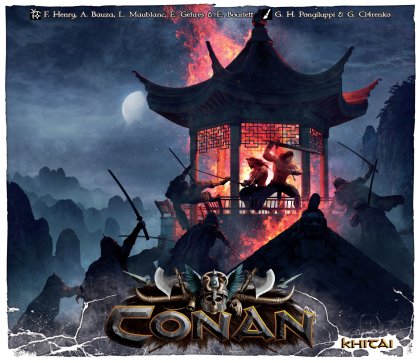 The first expansion for the Conan board game: The Tower of Khitai, by multiple game award winning Antoine Bauza and Ludovic Maublanc. Take Conan and his companions East, to the mysterious land that is home to great sorcerers whose spells are feared by those from the West, and become swept up in a sinister assassination plot!&#10; The box includes 22 highly detailed miniatures, two maps as well as host of cards/tokens and tiles. All this will allow you to play out a total of six scenarios (4 in the box, 2 on our website). The four scenarios in the box are magnificently crafted by the highly acclaimed authors Antoine Bauza (7wonders, Takenoko) and Ludovic Maublanc (Ca$h n&rsquo; Gun$, Cyclades). Take part in a daring assassination attempt before escaping from a flaming tower where the only way out is up!&#10;&#10;