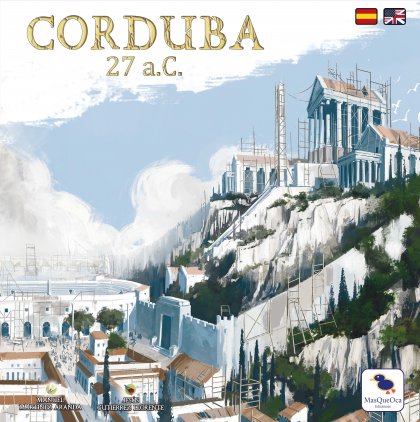 The year is 45 BC. Julius Caesar brings all the leaders of the provinces of Hispania Ulterior together for a meeting in Corduba, where he thanks them for the support received during the recent civil war. The fight between Caesar and Pompey had ended with a clear victor, but not all Roman citizens were completely behind Caesar.&#10;&#10;One year later, the cruel governor and Caesar&rsquo;s right hand man is nearly assassinated as he makes his way to the Basilica. This act turned out to be the precursor to what would happen just two years later. Cneo and Sexto, sons of Caesar&rsquo;s enemies, taking advantage of the influence that Pompey&rsquo;s name still carried and capitalizing off the rich resources of the Roman province, took control of all of Hispania, including the colonies of Italica and Corduba. These two traitors had somehow pieced together an army of no less than 13 legions, made up of veterans loyal to Pompey and the remnants of his defeated armies in Africa, along with citizens of Hispania.&#10;&#10;Caesar promptly travelled to the capital of Hispania with the intention of crushing the rebellion while it was still in its infancy. After losing a battle to Cneo for control of the bridge, Caesar was forced to winter in Ategua and, as it was necessary to feed his forces, he subsequently pillaged the surrounding area. Many were those who joined the rebellion led by Pompey&rsquo;s sons, but in the end there weren&rsquo;t enough of them. Forced to take refuge in the city after the battle of Munda, Caesar besieges Cneo and Sexto. He later takes control of the city after a daring assault on the walls. Sexto manages to escape Caesar&rsquo;s wrath, but his brother Cneo dies along with another 22,000 citizens of Corduba. As punishment for supporting the rebellion and giving refuge to its instigators, the city is left a smoldering ruin. But from the ashes a new city will arise&hellip;&#10;&#10;The year is now 27 BC, nearly two decades later, and Augustus, the first emperor, sends representatives of the most influential Roman families to Corduba in order to raise it to its former glory. To achieve this, it will be necessary to rebuild the city and cater to its inhabitants. All of this, of course, under the watchful eye of Rome.&#10;Players, who represent the heirs of different patrician families sent from Rome, will compete for the honor of becoming the next Governor, but must first win the vote of the people, and of Rome.&#10;&#10;The game is played out over three eras, each one representing a decade. During a round, players will take actions in turns until all decide to pass. Players use actions to produce or harvest resources, construct buildings and monuments, train legions, and tend to the religious needs of the people. To do this, players will have access to a certain number of specialists and workers that will increase as the city&rsquo;s population rises.&#10;&#10;It is important to note that Corduba is not a tile-laying game, but rather one of building actions that includes familiar worker placement and resource management mechanics.&#10;&#10;Actions available at the beginning of the game are scarce and mostly limited to harvesting basic resources in order to construct buildings and train troops. However, as players construct new buildings, the amount of actions available increases, since each building constructed provides a new action. Players will certainly appreciate the sheer number of possible strategies and combinations that arise during the course of a game.&#10;&#10;Another of Corduba&rsquo;s strengths is how a particular game evolves. A total of nine rounds are played, grouped into three decades. At the end of each round, the buildings release their workers and therefore become available for the next round. What this means is that all these buildings, which have been constructed one by one over previous rounds, are now free to all players regardless of who built them. Also, since there is an ever-increasing amount of actions available, strategic possibilities multiply. In addition to this, every action is just as important as the next, which leaves you with the constant feeling that another player has anticipated your move and occupied a building you wanted to activate or built what you wanted to build. Even though the rules do not change from one round to the next, players will quickly realize that the game does, since their strategies and perceptions during the first few rounds will be very different from later ones.&#10;There are no Victory Points in Corduba. In order to win, you will have to garner the favor of the city&rsquo;s inhabitants and of Rome itself. Constructing buildings in the different districts will improve your reputation there. Providing the largest armies for the Roman Cohorts or giving the largest offering to the gods will also help you win favor in the Senate, as well as, of course, helping the city meet the demands of Rome. At the end of each decade, players will have the opportunity to add to the Senate.&#10;&#10;But not all that glitters is gold, and, on occasion, the citizens will rebel. Players will have to deal with these uprisings, but this does not mean they will have to cooperate. However, if this aspect is neglected, the entire city could fall, resulting in a very undesirable outcome &ndash; all players lose!&#10;Corduba is a bona fide example of a game with near-infinite strategic possibilities. Each game will play out differently depending on the buildings and monuments constructed, the combinations from families and inheritances that players choose, the demands of Rome, the fluctuation of the resource market, the Res gestae (milestones) available, etc. Even if you try to play in a similar way as you did the last, you will not have the same experience. Truly, no one game of Corduba will be the same &ndash; you will uncover different strategies and combinations each time you play.&#10;Corduba is a game of medium to high difficulty with simple rules that anyone can understand, but will profoundly challenge players of even the highest skill levels.&#10;&#10;&mdash;description from the publisher&#10;&#10;